I think that most of you know by now that I travelled to London last winter for almost two weeks, but I’ve never really talked a lot about my tip. But here, I’m going to do that. I’ll talk about my favorite things that I did, people I met, places I saw – you get the picture. The positive side is that I really never had a “bad” moment on this trip, that is until I had to start packing to come home, so a wonderful happy post about everything that I did in the ten days when I explored the city on my own.

First off, you should all know that this was my first big solo trip that I had taken. In the past, I have traveled alone to visit friends and family, but I’ve always known the people who I was staying with. There is the small exception of when I went down to Connecticut for a night to attend a dear friend’s book signing and poetry reading, but other than that, I’ve always stayed with people I know. And visiting London has always been a dream of mine, but I never planned on exactly how incredible this experience would be.

(The following post will contain a lot of links to various places that I visited throughout my trip, in case you’re curious about my favorite things.)

A lot of my trip was planned out beforehand, simply because I’m a huge planner when it comes to traveling. I love to know what I’ll be doing, who I’ll be seeing, and where I’ll be exploring next. There was definitely a fair lot of unplanned events that took place as well, but I tried to plan out a lot of things in advance.

Day one was incredible, I landed at Gatwick Airport and got into the city around 11am – which was a bit of a surprise to me, I didn’t think it would be so quick. I was lucky that I was able to get right into my hotel room at the bed and breakfast that I stayed at, which was right near Victoria Station. As I made my commute into London, I made plans to explore the Parliament building and get a late lunch with one of my first online friends Ellis. She works in the Parliament building, so I was fortunate to get a semi-personal tour of Parliament after we got a bite to eat. I was surprised with how much energy that I had,  I spent the early afternoon on my tour with Ellis before heading back to my lodging. I also had my official “cheeky Nandos” experience with Yvonne and Rosanna that evening, and now I understand so much about why everyone talks about it.

Day two was just as impressive. I met up with one of my newer friends, Jade-Louise, who I had gotten to know earlier in the year. We both share a deep, mutual love for both the Royal Albert Hall and LEON Restaurants, so we based our day around those. The Royal Albert Hall is a sight to behold enough from the outside and as I walked up to the building, I found myself even more awestruck just to stand in front of it. When Jade-Louise arrived, she and I had decided to take a tour of the inside of the building, which lead to us getting excited to be inside, hearing about the history and of course, mentions of the BBC Proms. We walked all over London after – through Hyde Park, all the way up Oxford Street, and then ended up back at the Royal Albert Hall by the evening. Along the way, we stopped at a LEON in South Kensington, but since their coffee machine was broken, we ended up finding supper at the LEON in Victoria Place. I have a deep, deep love for LEON, which will be discussed in a further post, and it was surreal to be there after owning four of their cookbooks already.

The day after that was just as incredible as the two before it, I met up with Becca – who is truthfully one of my closest and best friends. We explored a bit more throughout London and Oxford Street again, along with slipping into the BBC Broadcasting House were we fangirled a bit about being inside the building. (Budding television producer here, you have to excuse me!) We also visited the LUSH on Oxford Street – three stories of absolutely incredible smells and pretty bath bombs all over the place – and had a nice little afternoon tea in Costa. Our evening ended with Wicked – which Becca has seen many more times than I have – but it was the most incredible performance that I have been to, and then a late-night cheeseburger and fries at Maccas before going our separate ways. And, to top it all off, Becca and I are already planning even more theatre trips for future visits.

Thursday was Harry Potter day! I booked the Harry Potter Warner Brothers Studio tour through Golden Tours and it was so surreal being in the same set as the actors and actresses who I grew up watching in the films. Harry Potter has been a huge part of my life and I met my very first online friend through a fansite ages ago. I went up by myself, which wasn’t so bad, since the Golden Tours have a setup where you can take a bus (it looks like the Knight Bus, by the way!) from Victoria Station to Watford, where the studios are located. I truthfully can’t describe how impressive it was to be there, and my photos on Facebook don’t do it justice. Just … if you can, go. That’s all I can say.

Friday, Saturday and Sunday were relatively quiet, I needed a few days off to breathe and explore on my own. The only day where I really did anything exciting was Saturday, which included a fantastic afternoon with Yvonne, where we walked all over the city and I got to see London more as a casual observer, instead of a tourist. We went into a few comic shops, along with wandering along Oxford Street once again. While we had hopes of going to Winter Wonderland, the lines were absolutely ridiculous and we ended up exploring throughout the city even more. Friday and Sunday were simple, exploring the city and revisiting a few places were I had gone previously.

My last few days were certainly exciting and Monday was oh so fun! I didn’t have much of a plan for the day, but I got a chance to see Ellis before she went off to work. We got hot chocolates and a late breakfast at the Dominique Ansel Bakery in Victoria. After she headed off to work, I stumbled upon a market where I got to see some reindeer, before I walked over to Sloane Square. That evening, I went back for an Air Ambulance fundraiser, which piqued my interest at the sight that it was the traditional Lessons and Carols service as well. But, as I stepped inside, my excitement only doubled as I flipped through my programme of the event. It had just so happened that one of my favorite British dancers from Strictly Come Dancing (their version of Dancing With the Stars) happened to be at the reading. After the event, I nearly fell over myself when introducing myself to him, along with getting two rather blurry selfies before going back to my hotel. I was shaking the entire time, and to this day, it still seems surreal that I actually had a chance to meet Anton Du Beke.

Tuesday. Tuesday. Everyone I know should know just how special the morning of the 6th of December was to me. I can’t properly summarize this morning in a single paragraph, but I will try. For the past year or so, I have found a great deal of inspiration from discovering who Katie Derham is, along with her interests and such. (There will be a much longer blog post on how much Katie has inspired me later on.) Katie has been a wonderful friend to me, and her and her family truthfully are like family to me as well. And I had the chance to meet up with her, along with one of her dear friends, Louise, for coffee at a LEON in the city. I can’t summarize this event into a single paragraph, but when I walked out of there over an hour later, it felt like I had sat down with family who I had known for years, not some strangers who I had only seen in person for an hour.

The rest of my trip was quiet and a bit uneventful. Tuesday afternoon was spent wandering through Covent Garden, along the Southbank, and back toward my bed and breakfast again. I needed a lot of time to process my trip, and it was nice to end on a quiet note. Wednesday was spent with a mixture of packing, along with revisiting some of my favorite places once again. I went on another tour of the Royal Albert Hall – which solidified my dream to hear live music preformed in the venue – along with walks throughout the city to reminisce on the time I had spent there.

Leaving London was truthfully one of the hardest things that I had ever had to do and I spent my last evening quietly crying to myself in the Victoria Place LEON over the notion of leaving. But, I’m just as delighted to be returning to England this fall to pursue my studies at the University of Brighton for Television and Digital Media Production.

Myself and Katie Derham

One of the rather blurry selfies of Anton Du Beke and I. 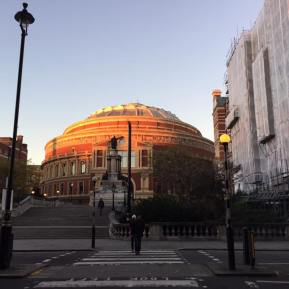 Sunset over the Royal Albert Hall

Myself and Louise Hulland 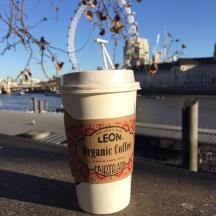 Until next time, Reena x